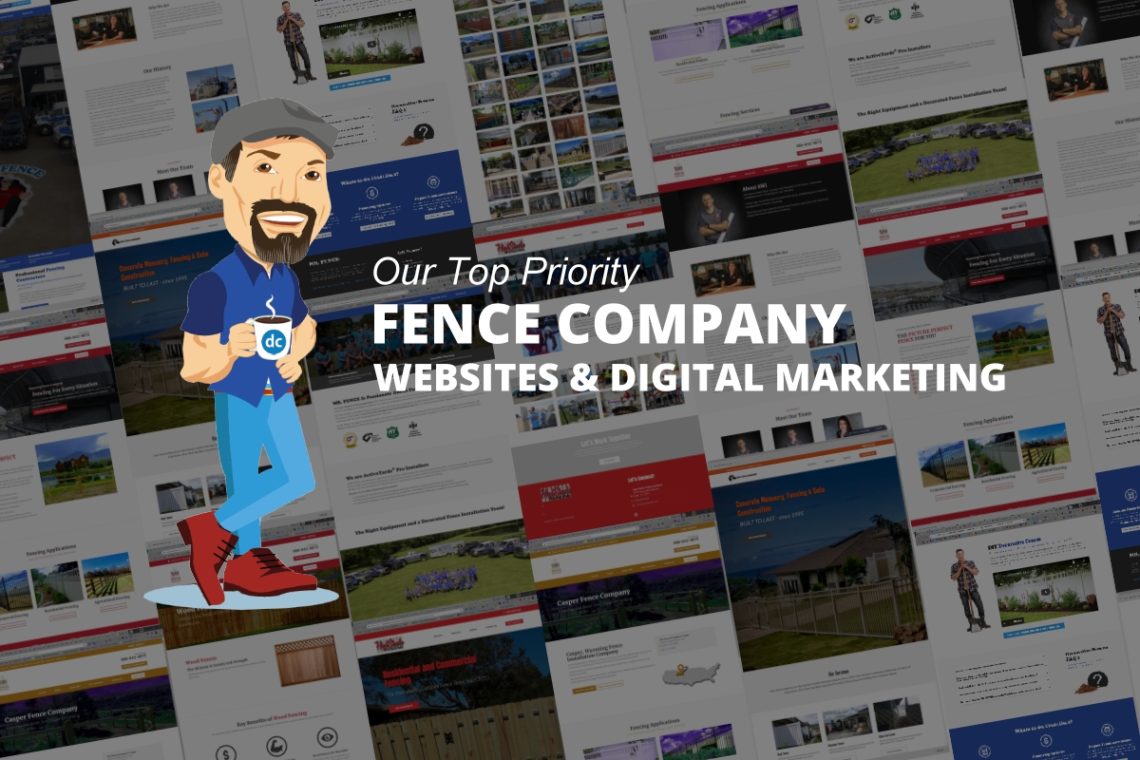 It’s official!  Our agency is formally announcing a complete shift in our focus – to working (almost) exclusively with fence companies!  It has been a long-time coming, really.  Over 50% of our clients over the past 3 years have been fence companies, and this year it is over 75% fence companies.

… and we are excited!

Why We Work With So Many Fence Companies Already

Several years ago, we signed our first fence company as a client … and it was a doozie!

Many people in the fence industry would surely be familiar with ActiveYards.  ActiveYards is one of the leading manufacturers of aluminum fence and vinyl fence in North America.  Their headquarters are relatively close to our New Jersey office and it turns out we knew a couple of key people in their organization.  One thing leads to another … and within a few months we begin working on a website project for ActiveYards.

Now, it needs to be said, that knowing the right people gave us the opportunity to be considered for the job, but it was our qualifications and our experience that got us hired, and it was our success in execution that has kept us there, working with ActiveYards still, several years later.  The decision-makers at ActiveYard did not know us in the beginning.  We had to prove ourselves worthy of their awesome company.  Ultimately, our previous experience working with Nike and Disney and many other awesome companies is why we were given the shot.

Like other fencing manufacturers, ActiveYards has a network of fence dealers across the country.  Because ActiveYards was so happy with the work we had done for them on an earlier project, they asked us to develop a digital marketing program to help their dealers rank better on Google and make more sales.  2 months later, we launched a 6-month pilot program for a group of 10 fence companies across the country.  Each of them hand-picked to create the largest amount of diversity possible.  The goal was to see how the program would scale to a larger number of fence companies and if it would be effective in a diversity of markets.  The marketing director at ActiveYards also suggested we launch 3 different “levels” of the program at 3 different price points to see what impact that had.  It was a great idea!

Long-story short, all 10 fence companies saw impressive results.  The 3 fence companies that were on the most aggressive, most expensive digital marketing program shot up to #1 in their markets by the time the program had concluded just 6 months later!  The other companies on smaller budgets didn’t quite reach #1 in their markets but each one of them rose to TOP 3 rankings in Google in their immediate areas. Total success!

From there, the story almost writes itself.

There is a saying I heard once that “success doesn’t keep secrets”.  When the companies we worked with suddenly shot to #1 on Google and their websites improved so much … other people took notice … in a big way!

Before long … the phone started ringing from fence companies across the country … and here are are. Sam with Mr Fence himself – Shawn King ,,, and a room full of fence company “dudes” that I am proud to now call friends!

I am a fairly burly dude.  I played football and wrestled (both sports) in college.  These are 2 rough and dirty sports.  As a teenager, I worked for a new home builder in the summers, “bangin’ nails”.  In another life I could probably end up as a “fence guy” myself!

For the past 20(ish) years, I have often sat in huge conference rooms with C-level executives and VP’s and directors of all sorts – working on strategies for digital marketing campaigns for products and services I often don’t care a lot about sitting with people who didn’t look much like me and had little in common with me, personally.  I never quite felt in my element.  At no point could I just give someone a high-five or a chest-bump when one of our campaigns kicked-ass (which they often did).

But fence guys are different!

Not long ago, I had the privilege of spending a week in Nashville at the Mr Fence Academy with about a dozen (or so) owners of fence companies.  I can honestly say, it was one of the best weeks I have had in year.  That is when I learned that I absolutely love fence guys.  They are my kind of people!

What This Means Moving Forward

In the coming weeks and months, I will be releasing a whole series of blog articles that will lay out, in detail, why it matters that we have shifted our focus to websites and digital marketing packages for fence companies,  and how this shift impacts the way we do “life” and “business” around DotCom.  That being said, these changes have been happening for the past few years naturally, it was long-past-due that we fully recognized, embraced, and enthusiastically run in our new role.

We do have a large number of clients who have been with us for many years in other industries.  We will, of course, continue to work with them as they have become not just clients, but friends in many cases.

However, the future of DotCom is squarely in the fencing industry.

Now, where is my shovel?

Sam Natello is the founder and top dog at DotCom Global Media. Sam is expert digital strategist who has worked with some of the top brands in the world. In addition to running one of the premier website design and digital marketing agencies in the U.S., Sam also serves on the board of directors for multiple high-performing companies, is an author, and has spoken at business conferences across the United States. Read his inspirational story "From Homeless to CEO." Feel free to send a message to Sam with any questions or comments.